The Curious Case of Nick Kyrgios 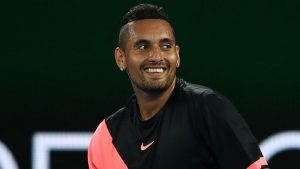 Up until about 12 months ago, when talking about Australian tennis you could quite comfortably lump Bernard Tomic and Nick Kyrgios into the same too hard basket. Kyrgios had just returned from a ATP suspension for giving up during a match at the Shanghai Masters, whilst Tomic was embroiled in a war of words with Roger Federer after Rog suggested Bernard needed to work on his game. At the time Tomic was ranked 17th in the World – yes really – and Federer was pointing out what might be needed for him to break into the Top 10, but rather than take advice from (arguably) the greatest ever tennis player, Tomic chose to do what he does best – petulance.

Fast forward twelve months, and Kyrgios and Tomic are harder to talk about in the same breath.

After failing to qualify for this year’s Australian Open, Tomic – now ranked 143rd in the world – was asked quite reasonably, “So Bernard, what now for you?” to which he replied:

As Tomic seems to be on the fast-track to starring in a 2025 episode of Where Are They Now? Kyrgios on the other hand, now ranked 17th – the position Tomic occupied last year – appears to be preparing for a decade of winning ATP titles and being a serious contender in grand slams.

Today, the Australian media is awash of stories of public redemption for Nick as he seemed to “care” and have a real go during his Round 4 loss to Grigor Dimitrov.

But has anything really changed? Has he matured? Has he found his purpose?

I am, however, interested to observe how he handles things now they appear to be going well for him. He won the Brisbane title a couple of weeks ago, the media are easing up, and even Will Smith seems to love the guy. But even with the Fresh Prince in your corner, sometimes success masks one’s shortcomings rather than prove they’ve been addressed.

For example, when Nick has managed to beat either Roger Federer, Novak Djokovic or Rafael Nadal (in total he has done this five times in his career) only once has he has gone on to win his next game and it’s just possible that a victory against any of these three players might serve to prove to himself, and all his doubters that he really can play and everyone should just leave him alone.

Being caught in a mindset focused on proving oneself, leaves little room for improving.

With elite athletes, as well as improving technique, tactics and strategy, the role of challenging the proving v improving mindset is the domain of the coach. In Kyrgios’ case, he doesn’t have one. In the past he’s said he’s “not too fussed” about having a coach, but in recent times he employed Sebastien Grosjean before the two parted company late last year, so he started this year, once again coach-less. This point that has been picked up on by virtually every tennis commentator who say when Nick plays, he plays what’s in front of him, he’s a natural talent – Jim Courier likened him to a free-flowing jazz performer – yet when the very top players play, as well as talent, they have a plan or game management strategy. These strategies are developed with the opponents strengths and weaknesses in mind and whist a player might not be able to research every opponent s/he might come up against, a coach can.

During his loss to Dimitrov, Krygios was called for foot faults, something he remonstrated with the Umpire about, being heard on mic saying, “I haven’t been called for a foot fault for the last three years. That’s twice today. It’s not possible man.” Whether correct or not, it’s a simple technical issue – that can cost games – that a player would struggle to identify during practice. But a coach could.

It seems clear to most who know more about tennis and Krygios than I do, that even a “natural talent” like Nick would benefit from a coach, so it begs the question, why doesn’t he have one?

It might be that to engage a coach would require Nick to admit he isn’t good enough. It might require him to work harder than he has done before, or change the manner in which he goes about his life. And for him to want to do this he has to really love, not only tennis, but all the hard work it takes to be his best.

And it might be that he’s not that keen on any of these things. He’s said before he’s not keen on tennis.

But I think it’s possible that in elite sport individuals feel defined by their outcomes, their win/loss percentage or their stats. They feel judged by what they produce, rather than who they are. And as I eluded to before, when things are going well, all is good, but when things start to get tricky, there are some who might see not trying, or not caring as a safe way out.

Almost counter-intuitively, some individuals who feel defined by, or valued because of their performance or outcomes, might actually stop trying to produce. In doing so, the conversation focuses on their need to care more, or try harder – usually because they have the talent – and this is a safer conversation and plays to the ego of the athlete. Compare this to the confronting realisation that even after a sustained hundred percent effort the athlete still comes up short. For some, being called a brat, lazy, immature, wasted talent is safer for their self esteem than being seen as not good enough.

Given the recognition Nick has received for his effort, determination and attitude so far this year, as well as the plaudits for establishing the NK Foundation for underprivileged youth,  I’m very curious to see how he responds. I genuinely hope he does so positively.

← Is “by teachers for teachers” always a good thing?
[SNEAK PREVIEW] Chatting with Sir Ken Robinson →