**THIS** might just be the biggest challenge facing your school…

Of all the challenges facing Australian schools in the 21st Century, including funding, falling behind Asia, and preparing kids for jobs that don’t yet exist, there is one challenge that is not being afforded the attention it deserves, and in light of the shifting political landscape it might just be the biggest challenge facing schools in the 21st Century; “Do young people feel as though they belong at school?”

In 2015, the NSW Department of Education published a report of the findings of a 2013 pilot survey of 78,600 high schools students in public schools across the state. Using the Tell Them From Me (TTFM) Survey, students were asked to respond to questions about their experiences of school.

This was the standout finding for mine. 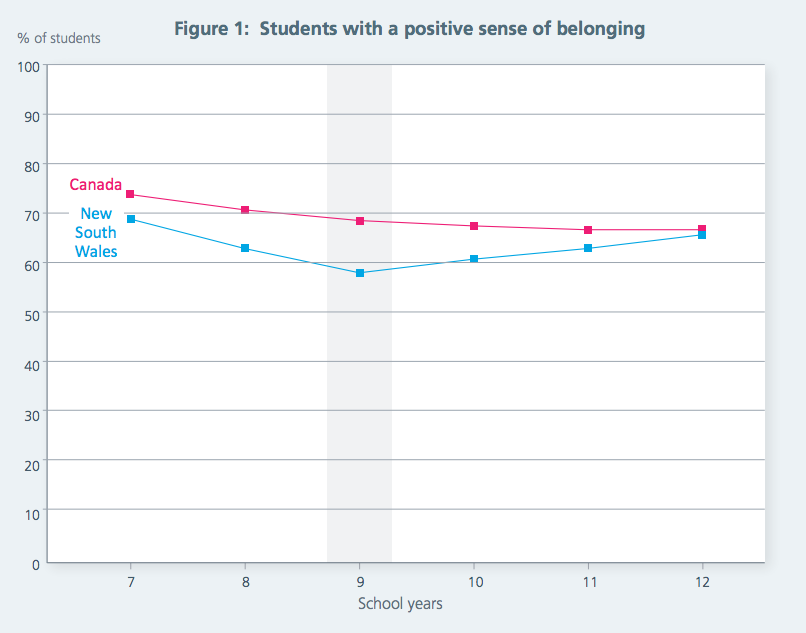 It’s referenced against Canada, as this is where the TTFM survey was designed.

It’s important to recognise that as well as benefits to learning, studies have shown a teenager’s sense of belonging has the strongest link to depression – even more so than attachment to parents (assuming there has been no prior mental illness). This should serve as a prescient warning, given that kids who start school next year will graduate in 2030, the year that the World Health Organisation predicts that depression will become the leading cause of disease in the world.

Interventions that promote school belonging should therefore be a vital part of any approach to enhance student wellbeing, but schools are in an almost impossible situation as they do not operate in isolation. In many ways they reflect the society they serve, and the issue of youth belonging is a hot topic at the moment in light of Immigration Minister Peter Dutton’s suggestion that disaffected Muslim youth’s involvement in terrorism and crime is a result of allowing so many Lebanese Muslims into Australia in the 70s. Dutton is seemingly unaware of the irony that his words only further disaffect those of the Muslim faith.

When you feel you don’t belong where you are, you go looking for someone – anyone – who gives you the impression that you matter. This is the modus operandi of every gang in the world.

And of course, Minister Dutton isn’t alone. This year saw the return of Pauline Hanson to the Senate, riding the crest of a wave of anti-Muslim sentiment, supported by the likes – of all people – Sonia Kruger. Ray Hadley, Alan Jones and Andrew Bolt we expect and we can reassure ourselves that young people aren’t listening to them, even if there parents are. But the host of The Voice???

And of course it’s not just Muslim youth who might feel marginalised. Cast your mind back over 2016 and think how some young people might be affected by a national newspaper carrying a cartoon depicting Indigenous fathers as incapable of raising their young.

Or how might adolescents being raised by same-sex parents be impacted by the debate about marriage equality? And just how do schools ensure that these young people don’t feel ostracised, when in 2015, education departments banned schools from showing Gayby Baby, a short film exploring what it’s like growing up with same-sex parents. Yep, banned.

And of course there’s the furore surrounding the Safe Schools Coalition – an intervention to promote school belonging for LGBTIQ kids. An issue brought into sharp focus this week with the death of 13 year old Tyrone Unsworth.

The results of the Brexit and US Election campaigns have highlighted that ignorance, fear and “othering” gets votes whilst for and for media organisations, hits, likes and ratings. But at what cost to our young people and society in general?

I was in the UK a few days after the Brexit vote and saw the impact of the campaign. Leaving aside the fact that some of the more ill-informed thought voting “Leave” actually meant that immigrants had to leave, there were countless examples of minority groups being targeted, either verbally or physically. Many of these groups were young people in schools. I can remember when UKIP was a joke.

And since Trump’s election win, US media are reporting a significant rise in hate crimes including episodes of racist or anti-Semitic, pro-Trump graffiti along with threats or attacks against Muslims, many of which are occurring in schools. I can remember when Trump was a joke. 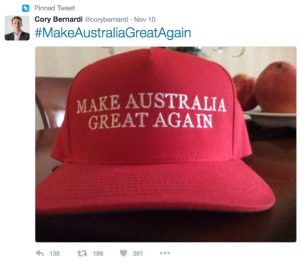 I also remember when the likes of Pauline Hanson and Cory Bernardi were something of a joke in Australia. But given Bernadi’s “dog whistle” tweet on the evening of Trump’s win, featuring a red baseball cap with the slogan “Make Australia Great Again” (which is still “pinned” to his Twitter profile) we would be foolish to dismiss them out of hand.

Whilst many have suggested that Australia’s compulsory voting laws mean that such right-wing rhetoric will never win the top job, that misses the point. Brexit and Trump have given increased legitimacy to such views. We even have terms for it now, “Post Truth” and “Alt Right.” It legitimises bigotry, it trickles down to our young, and whilst Attorney General George Brandis believes this is an inalienable right, I’d suggest we need to recognise the impact it’s having across society, not just in politics.

I know schools are constantly challenged to better prepare students for a world that doesn’t yet exist, particularly as we appear to be outperformed by our Asian neighbours in education league tables. Maybe that’s why we’re seeing an increased emphasis on Science, Technology, Engineering and Maths (STEM) or it’s sibling STEAM (A is for Arts), whilst also developing their so-called 21st Century Skills of communication, collaboration, creativity and critical thinking (The 4 Cs).

But if kids don’t feel like they belong when they walk through the gates at school, we’ve got Buckley’s chance of any one of these acronyms or approaches having an impact. And then we’re going to face much bigger social issues than just losing the “Education Race” to Asia, and in my opinion, it won’t be the schools that are to blame.

Even though – of course – they will be by politicians and the media.