A couple of months ago I was – along with other bloggers and “industry influencers” – invited by a large tech company to attend a free workshop showcasing their new tablet and software. They were happy to “donate” to me (and by extension I assume others) a tablet worth over $1000 in return for my blogging about how I used it in my work.

I’ve been receiving these types of offers since people started reading my blog. Many start-ups recognise that bloggers/tweeters who – in return for swag* – blog/tweet enthusiastically about said start-up serve as an extremely effective PR team as they have the added advantage of appearing organic. (Seriously… go back and read that link – Educators… look who is the parent company!)

I decided from the outset to avoid such relationships with companies (it’s on my contact page, but some still ignore it). I figured if the four people reading my blog were reading it because they valued my opinion, the least I could do was make sure that opinion was as objective as possible. It’s also for this reason that I don’t take ‘referral’ fees from other speakers/consultants which is also a common practice. If I recommend someone to you it’s because I think highly of their work.

Now to be clear, I’m not saying that bloggers/tweeters shouldn’t engage with companies in the manner I’ve suggested above (although many educators and most state education departments do say that), rather I’m saying that disclosure is a must. In fact it’s  not just me saying it. Last week I asked Twitter what it thought… 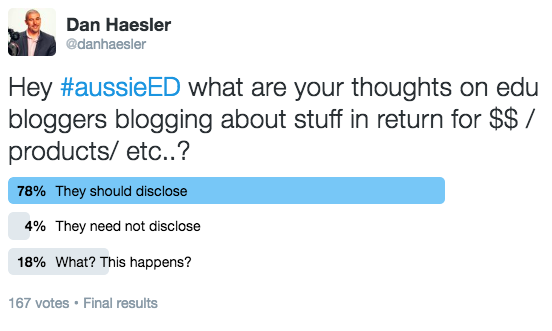 As expected the majority of respondents believed that disclosure was important but I was surprised that nearly 20% of respondents were not aware that this happened.

The fact that nearly 20% of tweeps who responded were unaware of this happening suggests a couple of things to me.

And I’d really love to know the reasons behind the 4% voting that bloggers “need not disclose.” If you were one of them, please comment below – I’m interested in your POV.

I don’t know if bloggers and tweeters consider themselves broadcasters, but just as commercial broadcasters disclose their arrangements and relationships, (granted – some needed some encouragement) maybe budding edu-stars should do the same as it might go a long way to maintaining/enhancing their credibility as their stars continue to rise & shine.

When I used #aussieED in the original poll, I used it believing the hashtag identified teachers online who had an interest in Australian education, who as they were browsing, might stumble across the poll and have their say. However, as Brett’s tweet suggests, #aussieED is more of an entity than I’d realised, and as such I wish to stress I was not singling out the entity that is #aussieED or its founders/moderators. 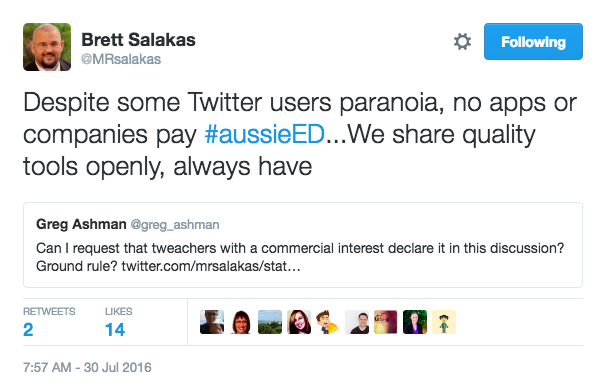 *Swag* – Used here to describe anything that includes, but not limited to: high value products, low-cost/discounted products, travel, accommodation, a platform at a conference, sponsorship of events etc.

← Coaching: Do You Wanna Impress or Improve?
Making teachers nervous the key to lifting standards? →