The Revolution Won’t Necessarily Be Televised

Over the past month Australia’s national broadcaster, the ABC, aired a four-part documentary called Revolution School in which it followed the staff and students of Kambrya College in Victoria throughout the course of 2015. The premise of the doco was that Kambrya was a struggling school – in 2008 its Year 12 results put it in the state’s bottom 10% of schools – and that by applying “cutting edge research developed by Professor John Hattie at the University of Melbourne’s Graduate School of Education, [Kambrya] undergoes a dramatic transformation. Ultimately [Revolution School] is a lesson for all schools in Australia, identifying what they can do to improve standards at this critical time.”

It was set against the backdrop of an Australian education system that is, “letting down our kids and the nation” and that’s compounded by the ‘fact’ that most of the things educators and parents think matter in education actually don’t.

John Hattie states from the outset that reducing class size, private education and giving parents choice do not “make a difference to the quality of education.”

The show concluded this week and it’s fair to say it received a mixed response – from 43 people on Twitter at least. 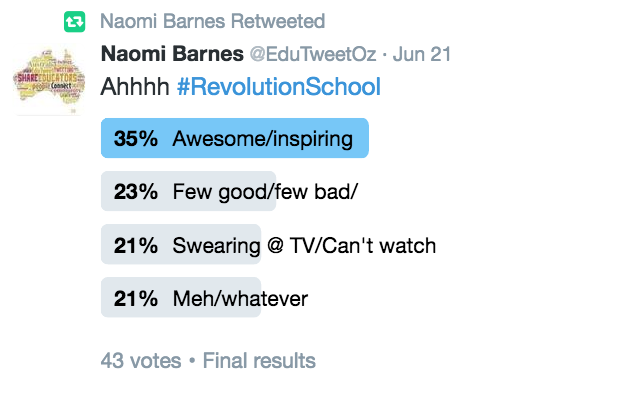 Here, for what it’s worth, are my thoughts on it.

a dramatic and wide-reaching change in conditions, attitudes, or operation.

I can only assume that this was a decision made by TV execs who needed something catchy, and to be fair it certainly caught my attention when I saw it advertised. I was genuinely curious to see what kind of revolution was taking place, but I was left feeling a little underwhelmed.

To be clear – I’m not dismissive of the efforts of the teachers, the consultants and – importantly – the students. Any school, teacher or student who works to improve standards is worthy of acknowledgement. From the outset I commend the staff and students of Kambrya for allowing the cameras in to give an insight into how a dedicated team of teachers (as well as the kids) can address some of the daily challenges faced in a typical school. For some watching it would have proven insightful.

Rather I was left underwhelmed because there was very little in the show that could be seen as being revolutionary. Whilst it might have documented a wide-reaching change in conditions, attitudes or operations at Kambrya, the claim that Revolution School would “serve as a lesson for all schools in Australia,” might be seen as a tad patronising.

It should be noted that Revolution School  had at one time been titled Making The Grade, which in my opinion would have been a more appropriate (if less appealing to TV execs) title for the documentary.

Many of the strategies for improvement were a result of the school’s partnership with Melbourne Graduate School of Education (MGSE), with its impressive team of educators and experts. Teachers were able to work with the likes of John Hattie, Lea Waters, Bill Rogers and Di Snowball to refine their approaches in class and the wider community. However the coverage of these working relationships was superficial at best, limited to soundbites and the obligatory rounds of applause at the end of teacher PL sessions. Bill Rogers, for example is a legend in the realm of classroom climate and handling behaviour issues, but all we got from his appearance was the idea that you could chart on a whiteboard how on-task the class are over the course of a lesson. Now I appreciate that TV execs might not think that a more in-depth exploration of classroom climate would be compelling viewing, but if Revolution School really was going to “serve as a lesson for all schools in Australia” then these are the paths they needed to go down.

Similarly with regard to Lea Waters’ work on wellbeing, I cringed at the superficial nature in which it was presented to the TV audience, with no reference to what Positive Psychology is or the potential significance of character strengths.

However one soundbite I did enjoy was literacy expert Di Snowball’s reflection of the way in which many schools teach reading using literacy exercise books. In doing this kids only read small passages in isolation – something that was implied did little to encourage a love of reading and as Di pointed out:

What’s the point of improving reading through these programmes if you aren’t then reading?

John Hattie was a common voice throughout the series and in Episode 4 introduced the idea of teachers having their lessons transcribed live, and their words projected onto screens around the classroom. A programme from MGSE called “The Visible Classroom.” (As an aside, this is on top of Hattie’s Visible Learning approach, and Lea Waters’ Visible Wellbeing approach. I’m spotting a theme.) One of the main reasons for doing this is so that the data from the class can be evaluated by MGSE to ascertain how much a teacher talks and what kind of dialogue with regards to questions and interaction is happening. Hattie argues that teachers should be talking for around 50% of the time in class, but in reality most teachers spend 80-90% of the time talking. Assuming this premise is correct, the episode went on to show teachers who had in fact reduced their talk in class, but again tellingly for a series that was to “serve as a lesson for all schools in Australia,” it didn’t explore the changes in practice/planning that teachers undertook to make this happen. I’d imagine for some teachers these changes would have presented significant challenges, and it would have been good to see how these challenges were addressed.

Towards the end of the series the concept of Clinical Teaching (the approach taught at MGSE) was introduced as having “the potential to revolutionise our classrooms” but again I was – along with many teachers I’d expect – left underwhelmed. The core principles of Clinical Teaching as explained by Hattie are:

In other words… teach.

Look, I know I’m being a little flippant here, and I do know that this might seem revolutionary to some… but seriously, I recommend you read pretty much anything by Dylan Wiliam, because formative assessment has been addressing this stuff for yonks.

AS FOR THE OTHER STUFF…

An outdoor ed camp, a class for disengaged boys, a kid who left under a cloud of drug use, another who left after Year 10, kids getting into strife for fighting and (alleged but ultimately unproven) theft, a school production of Aladdin, a formal ball, a kid who didn’t get into medicine, stressed out G&T kids, a girl arguing with her mother, school captain elections and a deputy who was a little skeptical of consultants… are the ingredients of a typical day in a typical school and I’m unsure as to what lessons they taught us, other than apparently after going on a four-day hike, some kids who hated school and had previously all failed a maths test all of a sudden aced it on their return… Again, not underestimating the impact of the outdoor education or the commitment of the staff, but come on… the superficial nature in which it was covered left me cold.

I was left wondering if police officers are equally underwhelmed after watching an episode of RBT? Or what about doctors and nurses after watching Trauma: Life in the ER?

But then again RBT & Trauma aren’t broadcast on the premise that the policing or health professions are failing to such an extent that they require such TV shows to “serve as a lesson.”

Now to be fair, the series finished by highlighting the gains the school has made which are impressive and for which everyone’s efforts should be applauded, and it’s worth noting that this has been an 8 year journey of which MGSE were a part for the past 12 months. Clearly they’ve made great gains but there are still some questions that remain particularly given the premise upon which the series was set. 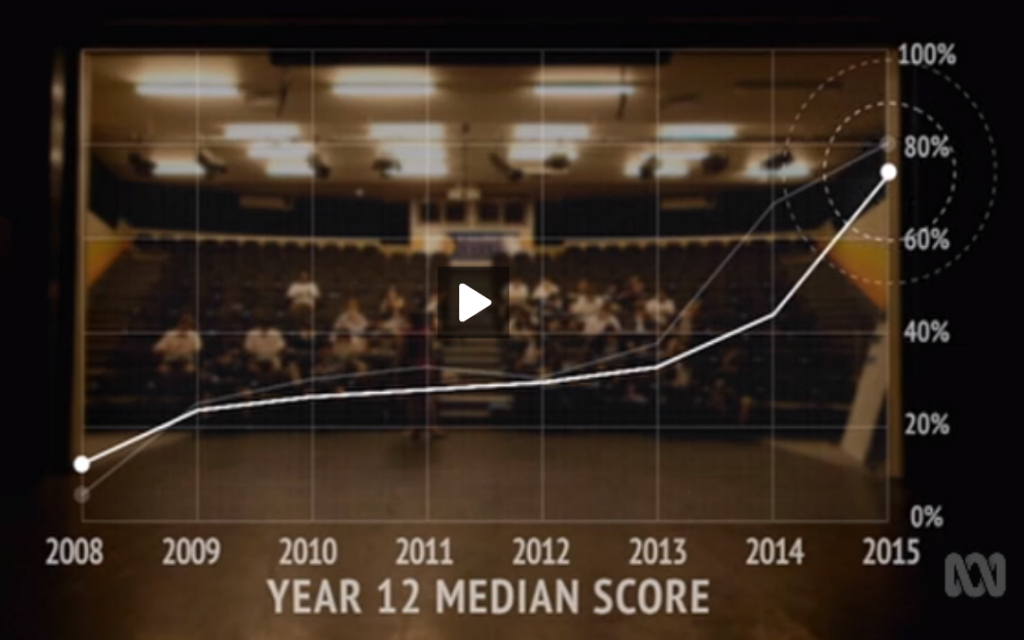 ← 3 Myths of Mindset
Coaching: Do You Wanna Impress or Improve? →

21 Comments on “The Revolution Won’t Necessarily Be Televised”