What Tennis Tantrums Teach Us…

Yesterday, Roger Federer won through to the semi-final at the Australian Open beating Tomas Berdych in straight sets.

Nothing too surprising there you might suggest, given you know Roger but probably wouldn’t recognise Tomas even if you bumped into him on as he walked off court.

But interestingly, Berdych beat Federer in their two previous encounters at Major tournaments and has accounted for him six times overall in all competitions. (Major tournaments differ from the regular ATP tour events as they are played over 5 sets as opposed to 3.)

After yesterday’s victory, Channel 7 commentator Jim Courier made reference to this fact, and Federer’s response was enlightening. He said that playing Berdych was a ‘pleasure’ as he’s ‘one of the guys that makes [Federer] a better player.’

I’ve spoken before about Federer’s approach to tennis. The fact that despite all he has achieved he continually strives to improve. His mindset is such that he sees defeats – such as those experienced at the hands of Berdych – as opportunities to improve as a tennis player.

This also resonates with the way I view Stan Wawrinka’s approach to tennis. Again I wrote about Stan and his tattoo that serves as a wonderful reminder as to the power of failure – as long as we’re willing to embrace it as an opportunity to learn, as opposed to an opportunity for a hissy fit…

Which beautifully constructed segue brings me to a couple of characters who would be – in my opinion – at the other end of the ‘Ability to Learn from Failure’ continuum.

Whilst the likes of Rog and Stan lose and learn, there some who lose and look to blame pretty much anyone or anything else other than themselves.

Living in Australia, of course the likes of Nick Kyrgios and Bernard Tomic spring to mind.

For Nick, an internet search makes for interesting reading… less about tennis and more about – well – this: 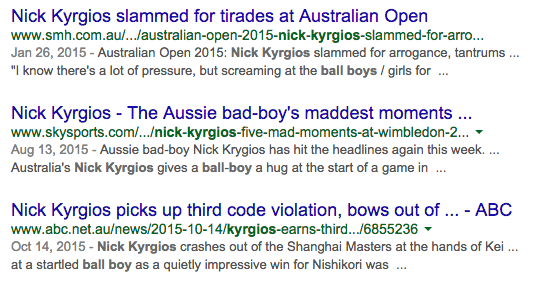 And of course who could forget his little sledge to Stan Wawrinka regarding his girlfriend.

It was interesting to note that in the wake of the Wawrinka sledge, his mother popped up in the press defending him.

Make of that what you will.

But when, this week,  Bernard Tomic suggested that Roger Federer had not praised him highly enough… that ladies and gentlemen – as they say in the classics – took the biscuit.

When asked to respond to Federer’s opinion that as a young tennis player, Tomic still has plenty to learn and maybe wasn’t quite ready to be a consistent Top 10 player, ‘Our Bernie’ came back with this zinger:

And just incase we were in any doubt as to whether or not Tomic would have played nicely with the other kids in the playground he came up with:

“I think he’s also far away from Djokovic as well if he wants to say that. If he believes I’m very far away from the top 10, I also believe my prediction that he’s nowhere near Novak’s tennis right now.”

“And I’m not inviting you to my birthday party either.”

Let’s be clear, Kyrgios and Tomic are phenomenally talented tennis players… but sooner or later they are going to have to realise that talent isn’t enough.

And fragile egos that need to be pampered and protected are rarely possessed by those at the top.

I wonder what analogies schools and businesses could draw from this?

← Developing a Minecraft Mindset
Gonski isn’t about getting *more* money… →

4 Comments on “What Tennis Tantrums Teach Us…”