Of late I’ve found myself working with kids from some fairly tough backgrounds.

Whether it’s kids who are wards of the state, living in temporary shelter, or kids in mainstream settings who don’t hold out much hope for their future, I’ve been keen to explore how Carol Dweck’s theory of Growth Mindset might apply to these young people.

Incidentally if you’ve read Mindset or not, I’d highly recommend getting a copy of Dweck’s earlier work Self Theories, a series of essays that go into more detail regarding the research and – in my opinion at least – is a better read than her more well-known publication.

Anyhoo… just last week I had the opportunity to try something with a group of kids who attend a school that caters for those for whom the mainstream education system simply doesn’t work. Some of these students (currently all boys in Years 6-8) have severe behavioural issues, some have wellbeing issues and most have a combination of the two. I’m fortunate that I get to spend time with these boys on a semi-regular basis and so have been able to establish a bit of rapport with them.

I determined that it might be interesting to play Minecraft with them… and just see what happens. I hypothesised that many behaviours that Dweck describes as being Growth Mindset behaviours would be evident whilst the boys played Minecraft:

I then wanted the boys to reflect on this after playing… but first the set up!

The very first thing I did was tweet out what I was thinking of doing. If you check out the comments down the side of the doc you’ll see heaps of good ideas, that either validated or pushed my thinking. Thanks in particular to:

In the end this is what I went with…

Equipment – Given I didn’t want to impose on the school with regards to organising Minecraft Edu accounts or the like, I sourced the following… 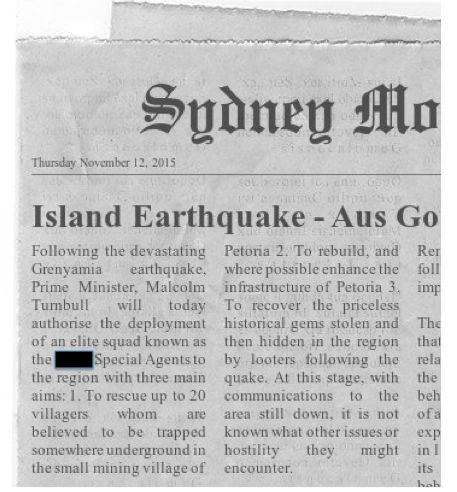 In order to set up the scenario in Minecraft I built a world using a seed… a simple internet search will give you plenty. For those of you interested, I used the Minecraft PE Seed: -94440. 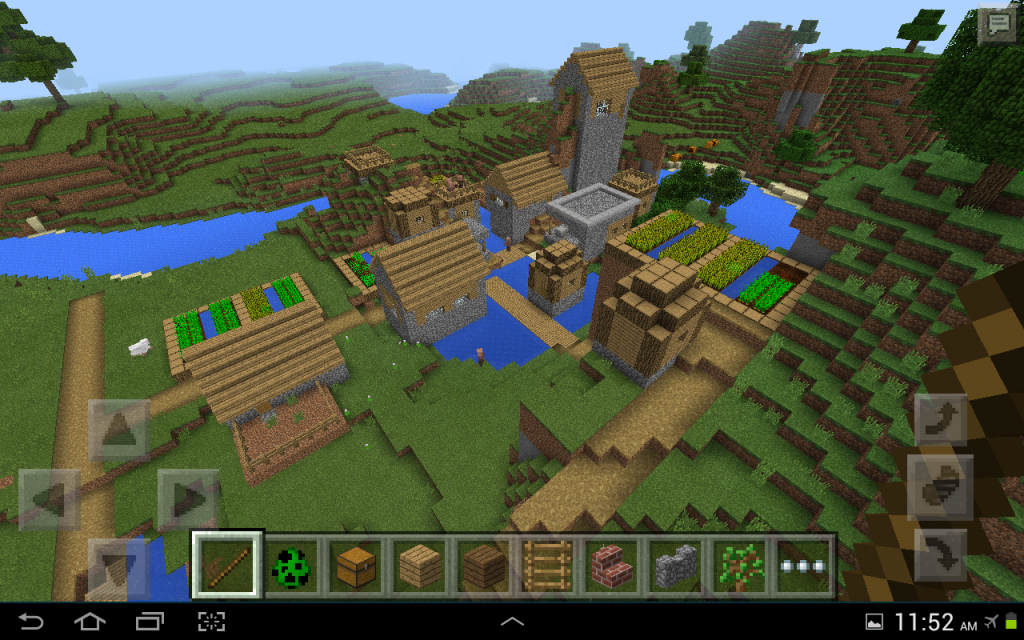 From there I was able to switch between creative and survival mode (I found that installing a mod called Too Many Items on my Samsung made this a much simpler process) in order to hide gems around the area, and ‘bury’ villagers as well as create the sort of havoc an earthquake might cause by detonating TNT around the place and setting fire to buildings… 😈 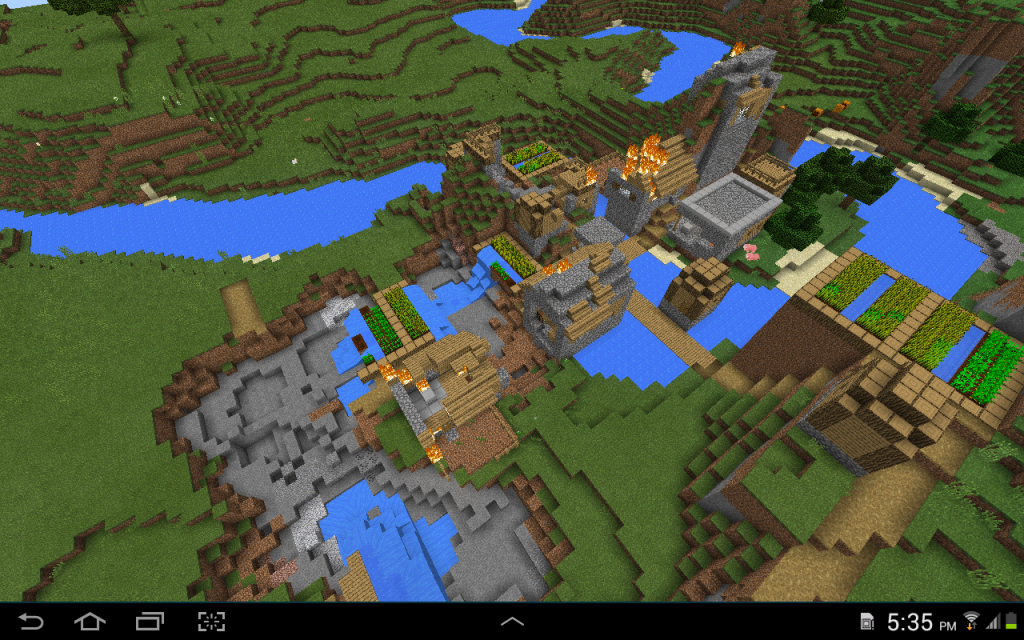 The kids had three missions: 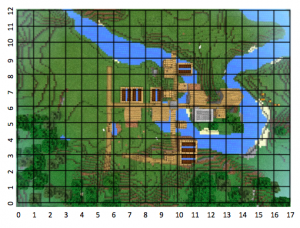 In the full Minecraft game (on PC, Mac or Console) you can use xyz coordinates that allow gamers to know where they are within their world, but in Minecraft PE this isn’t the case. So I created a map – again by going into Creative mode and taking a Bird’s Eye View screenshot and then overlaying a grid.

Students could work out the coordinates for the villagers and the gems by solving maths problems. 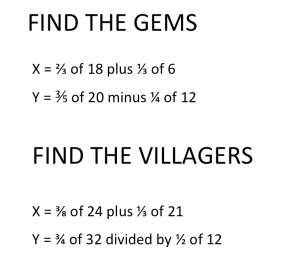 Each group of students – small groups of 4 boys or so, which is the nature of this school – had around an hour. The last 10-15 minutes or so was spent on the reflection. Which again I put out on Twitter in it’s early form:

This week I'm working w/ Yr 5-8 kids for whom mainstream doesn't work as to how they can develop a #MinecraftMindset pic.twitter.com/uIeJpz7EnJ

This was the final version. You’ll note I got rid of the sword (it’s school after all!), gave space for students to identify their own strengths (thanks to@corisel) and then scaffolded the transfer from Minecraft to ‘real’ life… (although Minecraft is real life of course! 😀) 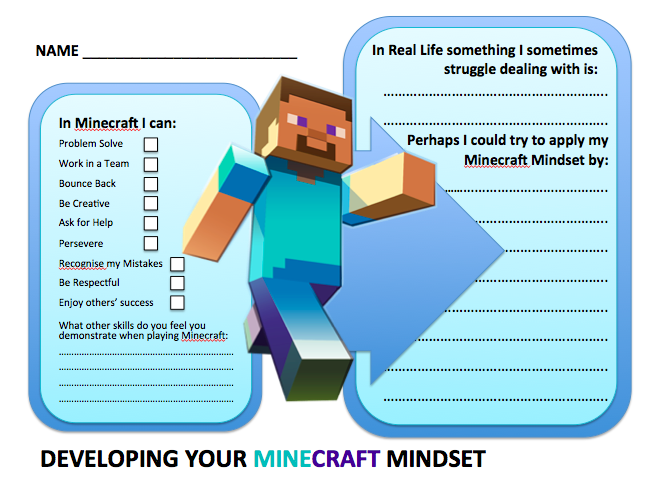 Was it a resounding success?

Let’s not go too far. It was after all a one-off session using the most basic version of Minecraft. I’m aware many of you will be using Minecraft Edu or the full PC-based Minecraft and as such will be doing much more advanced work.

But as the boys’ regular teachers noted:

As well as working with the boys I ran the sessions to show the teachers the power of Minecraft – or games in general – in order to get students to address their behaviours and – more importantly – their thinking around their behaviours.

The staff are now investigating how they might incorporate similar approaches down the track.

Obviously if this were part of an ongoing approach we would be able to explore our mindsets in various scenarios. I’m not saying it’s as simple as being resilient in Minecraft means you can be resilient in ‘real life.’

But I am saying for some of these kids acknowledging they do exhibit these behaviours somewhere is an incredibly important first step.

Demonstrating through Minecraft that they do exhibit the kind of Growth Mindset behaviours that Dweck talks about is – for some of the students – the first time they or anyone else have recognised they are capable of doing so.

If you think this could be of value in you classroom, you can get all my resources for this activity here, meaning you can use the seed (-94440) along with the map I’ve produced, also please feel free to change up the reflection tool to suit your context.

Would love to hear your thoughts, or other cool ideas you have for Minecraft or games in general!

← Should You *Reward* Good Behaviour?
What Tennis Tantrums Teach Us… →

5 Comments on “Developing a Minecraft Mindset”