Ten years ago, a talk by Sir Ken Robinson was published on TED. Having being viewed over 41 million times on TED alone, it has become one of the most – if not the most – viewed TED talk ever.

It was provocatively titled: Do Schools Kill Creativity?

The popularity of Ken’s talk catapulted him into the Public Speaking Stratosphere, not only in education, but also more broadly with many corporate and multinational organisations engaging him to present to their communities.

Clearly his message resonated. But as his message spread, many took issue with him. Such as Tom Bennett – the UK Government’s Behaviour Tzar and founder of researchED – who in his review of Robinson’s latest book Creative Schools dismissed his TED talk as “a lie” and dismantled pretty much every argument Robinson has made about the shortcomings of education. The reader is left in little doubt that Bennett is not even on, let alone driving the Robinson Bandwagon. And he’s not alone. A quick online search will turn up plenty of others who take issue with Robinson’s stance.

And I’m all good with that. I have no problem with open debate about ideas.

But the vast number of people who do resonate with Robinson’s message indicates to me that for some, schools did kill their creativity. Or at least that’s how they perceive it. However, for this to be a debate worth having we first need to agree on whether or not creativity is core business for schools, and even if we assume it is, it then begs the questions, “What is Creativity? How do we measure it? How many kids’ creativity is being killed, and is it enough for us to worry about?”

Again, an online search will demonstrate that these questions perpetuate a merry-go-round of arguments, the proponents of which seem disinclined to learn from each others position, and to be honest, the more I see of these arguments, the less inclined I am to engage. And this isn’t a defence of Sir Ken. I doubt he needs me to fight his battles for him.

What if the question was: Do Schools Kill Learning?

Rote learnt or not, for the thousands of students who walked out the door on Thursday, many would rather not think about the poetry of Robert Frost ever again, just as those who buried Clueless and Coleridge’s Kubla Khan before them.

I contacted Eryk over Twitter to see how he had come to this position, and his response was:

Imagine, for a second, if that really is the case.

Imagine if, after 13 years of learning the skills required to read, interpret and appreciate poetry, you never wanted to read poetry again.

Now I appreciate that wanting to read poetry is not synonymous with learning, but it must provoke thought about what, why and how we teach and assess – surely?

But imagine if, after 13 years of being in schools that aim to encourage life-long learning, our “best” students who entered tertiary education, felt compelled to cheat – rather than learn – at one of the countries most prestigious medical schools. Can you imagine? Well, you don’t need to.

A couple of years ago I witnessed first-hand the lack of learning in tertiary education. I was a casual tutor on a Graduate Diploma of Teaching course and I was struck by how many of the 200+ post-grads were focused solely on whether their assessment task was a Pass, Credit, Distinction or High Distinction. Rather than discuss how they might improve their understanding of pedagogy or teaching in general, feedback sessions were dominated by “Yeah, but why did I lose marks?” or “What do I need to do to get a Distinction?” and even occasionally, “Doesn’t matter, I only need a Credit on this one.”

I do wonder if this attitude might be the by-product of the emphasis placed on grades by teachers, parents and students in school. It seems to me that such a focus on performance can sometimes diminish the focus on learning. As Dylan Wiliam suggests, grading work results in students not reading the teacher’s feedback (which one assumes would enhance learning). He argues:

“Students who get high marks feel they don’t need to read the comments, and those who get low marks don’t want to.”

Imagine if one of our most common practices in school was actually diminishing learning.

And can you imagine if students with learning differences believed they were dumb and lazy?

How many of our students leave school feeling they do not need to learn, or in fact they are incapable of learning?

I acknowledge that all the examples I have used in this post – with the exception of Wiliam’s quote – could be described as anecdotal, and I agree that a series of anecdotes does not necessarily an evidence base make. Indeed, one of the arguments made against Ken Robinson is his over-reliance on anecdote.

But, look through the anecdotes I have highlighted.

Do you know anyone who might have a similar tale to tell?

How many readers of this post would have to say, “Yes” before we deemed it appropriate to at least consider the question: Do Schools Kill Learning?

Or perhaps, whilst it might be more confronting, it might be more appropriate – assuming we’re willing to act on the answers – to focus on particular groups of kids in our community and ask, for these youngsters:

Does Our School Kill Learning? 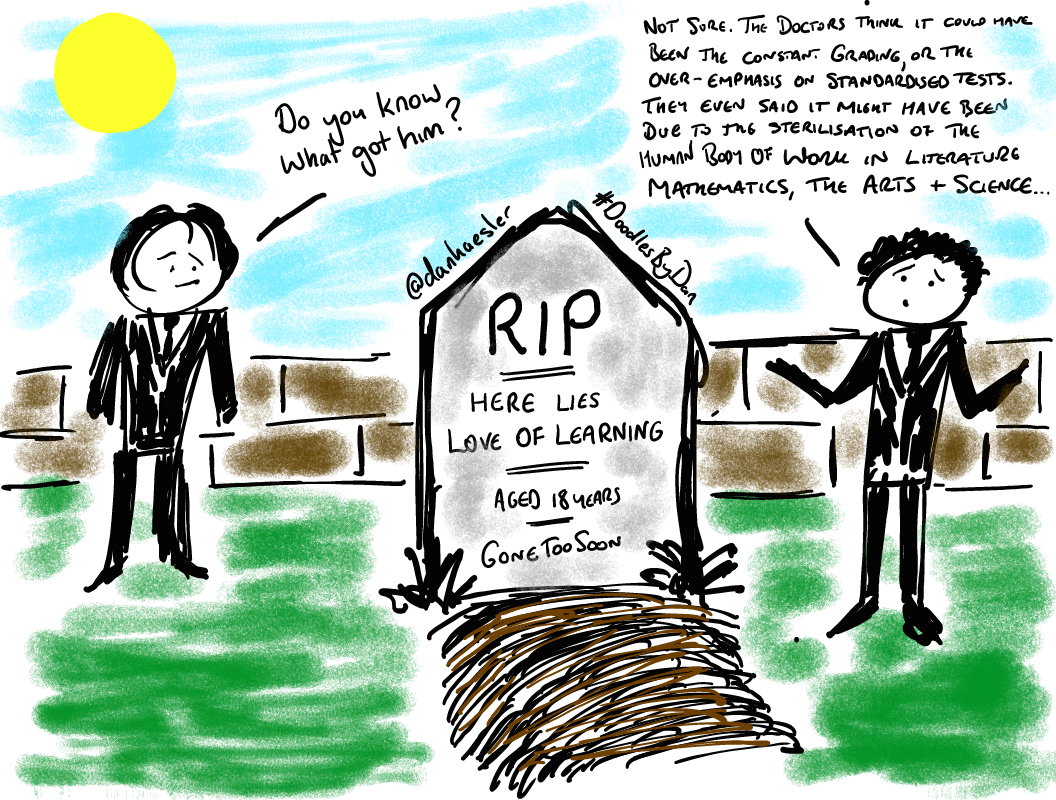 ← Making teachers nervous the key to lifting standards?
**THIS** might just be the biggest challenge facing your school… →

4 Comments on “Do Schools Kill Learning?”