This is the second in a series of posts based around an interview with educational researcher and Chair of AITSL, John Hattie. 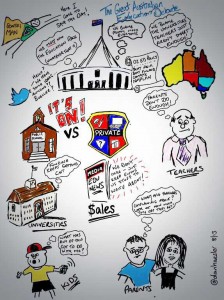 There are many facets to the education debate and one that pushes more buttons than most is the Traditional v Progressive teaching debate. Some read this as the Didactic v Student Centred or sometimes the Knowledge v Skills argument but either way, lines get drawn in the sand and teachers choose their respective side.

There are many bloggers who write extensively around this subject. I often read through this one by Harry Webb – who blogs forthrightly and points you in the direction of many more blogs and research to support his points – although I’m not 100% convinced that’s his real name… I could be wrong though.

I was keen to know what John Hattie – who was recently appointed the Chair of the Australian Institute for Teaching and School Leadership (AITSL) – thought about this debate, particularly as AITSL has devised a set of National Teacher Standards, are piloting innovativeLearning Frontiers approach to teaching and who on their website, showcase “best practice” by way of vignettes and short interviews with teachers.

This is interesting because Learning Frontiers, many of the standards, vignettes and interviews extol the virtues of inquiry or discovery based learning and even Learning Styles; strategies about which Hattie is on record as saying,

“We have a whole rhetoric about discovery learning, constructivism, and learning styles that has got zero evidence for them anywhere.”

I wanted to know if there was a disconnect between what he, as the chair of AITSL believed to be true, and what AITSL were promoting as ‘best practice.’

He went on to elaborate that often teachers have to deliberately teach students in order for them to construct knowledge. “I have no difficulty with constructivist knowledge’s of learning, and knowing, but not teaching.”

To further press his point home, Hattie referred to the article Should There Be a Three-Strikes Rule Against Pure Discovery Learning? by Richard Mayer which described three major series of investigations of discovery learning and inquiry learning that showed despite it continues to fail it is still used. Hattie says, “I think the problem is that, that people fail to make that distinction between the theories of knowledge such as Piaget and the teaching.”

So why are such approached included in AITSL’s website?

“I’m disappointed if there are things on the AITSL website that talk about learning styles,”

“They did a massive review in the last month or so going through and hopefully taking everything out that’s hinting [at these concepts]. We do know some of that stuff has a high likelihood of not working [and] they have taken that seriously and they have gone through and if anyone finds stuff that’s still left there we’d all be delighted to know.”

This naturally led into a chat about 21st Century Skills… which I’ll share with you in the next post.